After a brief period of no WAGGL, due to footy finals and various sandy vaginas, a field of 7 players descended upon Hillview GC.

However the field of 7 was cut down to 6 after The Fizzler, Stuart Schober, pulled a gut muscle 3 balls into his warm-up! Maybe a course of pilates could be in order?

And so it was 2 groups of 3 to battle it out on the Lakeside and Classic 9’s – after a brief technical delay (due to Carter not having enough battery power in his phone to score – apparently 88% is “no battery”, and Desilvas phone just not playing the game) the field tee’d them high and watched them fly.

Group 1 – Carter, Clint and Desilva (and Stuart in the passenger seat of Desilvas cart): By all accounts (mostly Carters) there was some pretty average golf played, interspersed with some glimpses of TV golf,  the highlights being Clints 250m(?) bomb on the 18th hole to take out the LD $20, as well as being the only person to park it on the green for the CTP $20. Carter had a quiet day, but even though he was to shoot in the 80’s will always find it hard to win when playing off a 12 handicap. Desilva, even with a caddy (Stuart) for 4 holes, had his excuses, the main excuse being he hadn’t played for a very long time after some major stem cell work on his knee, a few more rounds should see him getting back to some of the form he showed during The Open.

Group 2 – Troy, Hillview and Smith: Very much the same as group 1 had an up and down day. Some tidy club throws from Troy, followed by several expletive riddled questions to Allah as to why he hates him so much, saw his only real highlight being a lengthy downhill putt to save par on the 4th. Hillview was taking advantage of the luxurious fabric of his newly acquired WAGGL polo and his 27 handicap. Staying in the hunt for his maiden WAGGL win for most of the day. until, on the 18th hole, he played his 2nd shot into oblivion. A dropped ball resulted in a dropped bundle, finishing the day with an unfortunate 10. Smith started off slowly as per usual but managed to hit the lead in the middle stages with a run of pars and looked to have the win in the bag with 2 holes to play. But with a double bogey 5 on the par 3 it left 4 players in with a shot going into the final hole.

With Clint and Smith both recording a par on the 18th the honours were shared and $15 going to each. In saying that Clint was the real winner of the day collecting $55 overall and the coveted RTB points

Off the stick scores:

Special mention to Stuart for throwing his $10 into the win pool even though he didn’t compete, sportsmanship at its finest!

Next round WAGGL heads to Maylands Country Club, where another lucky player could be bestowed with the time honoured Shaun Robertson Encouragement Award. Seeyas there!

Full round and handicap update: 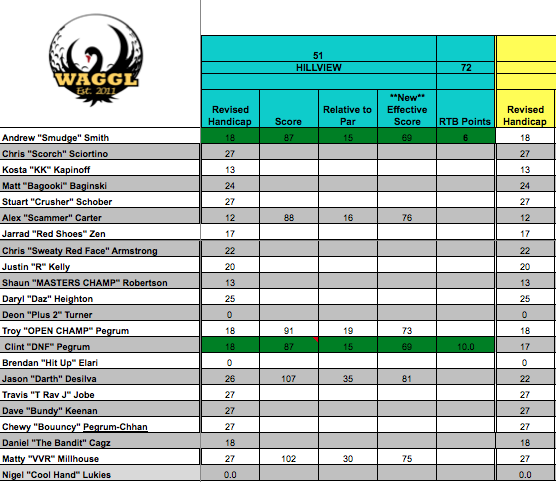 drives for show...putts for dough
View all posts by wagglsmith »

Posted on October 12, 2012, in Uncategorized. Bookmark the permalink. 1 Comment.