Some of the field hit the driving range early, not only to hit a few balls, but to get their last tanning session in before “winter” hits.

The late scratching of Troya brought new meaning to the term “Moving Day” and reduced the field to 7 runners (well actually 6 walkers and 1 driver).

Group one, consisting of KJ Bouuncy Chhan, Robbie “Seniors Week” and John Ills, got off to a slow start and maintained that pace throughout the entire round. With no players in this group finding any of the par 3’s in regulation throughout the round, it was a clear indication of just how hot & humid conditions can turn a relatively easy course into a tough day at the office.

Announcing his arrival with shrieks of “Troy!…Troy!..” Late “Comer” & self proclaimed “Tommy Gun” arrived shoes in hand in the nick of time to join Pusey, Smith & Hunter (but not Troy) to form Group two at the first tee. With little to no (golf) warm up, shot a tidy 81 off-the-stick, picking up the jack potted longest drive on the 18th hole along the way.

Pusey had a round he’d like to forget, the conditions were hot but his golf game was cold as ice, only getting warm on the par 5 9th where he secured his first of only 3 the pars for the day. Raising the bat for a whopping 106 off the stick, of which included three 9’s.

WAGGL’s resident Canadian, Chris “Hunter” Bubbs had an uncharacteristic front “Nein”, reportedly due to a mid-week all-nighter “watching German Hockey!”… “wuddya mean you caant find a job?” Out in 47 & home in 43, off a handicap of 12, showing just how much it can “puck” with your golf game. But all was not lost for the day after picking up the CTP on the par 3 10th.

Smith looked set to fire up after temporarily re-discovering how to swing a club, reeling off par, birdie, par on the 2nd, 3rd & 4th holes. But this sort of pace could not be maintained, eventually reverting back to mostly bogey golf for the remainder of the round.
Out in 43 & In for 46 for an 89 off the stick.

Making use of the first WAGGL approved cart for a senior & his max handicap of 27, Rob demonstrated how best to utilise these both to their full potential, carding (or should that be carting?) 93 off the stick – out in 48, in for 45 – for his 1st ever WAGGL win!

Official Scores & Handicaps will be updated and posted shortly. 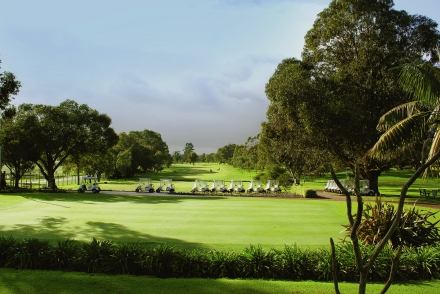 Posted on April 12, 2014, in Uncategorized. Bookmark the permalink. Leave a comment.